Australia is once again on its way to double-digit growth in international student numbers for 2019, with 720,149 students enrolled across various sectors as of September 2019, a 11% increase over the same time the previous year. This growth reconfirms Australia’s position as the second-most popular destination in the world for study abroad, after only the US.

Does not require GRE (Engineering programs),
no WES required,
IELTS 6 bands only* & scan copies are sufficient for i20.

For more information and advice, please speak to #happy #teamIVY in your city Admissions open for Summer'21 and Fall'21 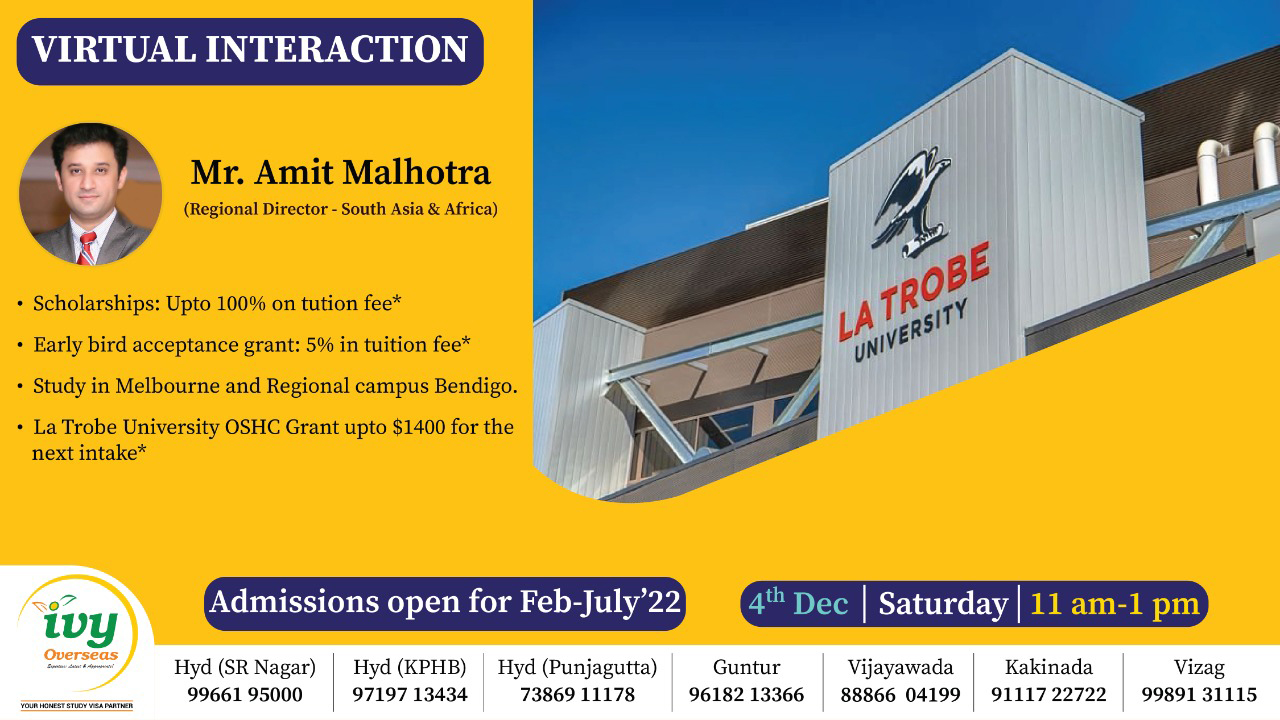 The length of time you spend studying abroad will depend on the program and level of degree you’re undertaking. Generally, an undergraduate degree will take three or four years of full-time study (for example, in the UK the typical length for most subjects is three years, while in the US the norm is four), while a graduate degree such as a master’s degree or equivalent will take one or two years.

When can I start applying for study abroad programs?

Considering your application as early as possible is the best way to go. After all, the sooner you gain acceptance into a university, the sooner you can arrange your travels. To avoid disappointment, note down all the relevant application deadlines (set out by your chosen university) in HUGE LETTERS on your calendar. Application deadlines will be different depending on the school, but, for programs starting in the fall (September/October), applications will generally be open from early in the year (January/February) until the middle of the year (June/July).

What are the entry requirements for study abroad programs?

Entry requirements vary widely between universities and between countries, so be sure to check the information provided by your prospective university before submitting anything.
Speaking generally, however, if you are applying for an undergraduate degree you will be asked to show that you have completed your secondary education to a standard that is in line with the required grades (e.g. your GPA, A-level grades or equivalent) for the program you’re applying to. If you have an international qualification and are unsure whether this is accepted, you should contact the admissions department of the university.
For non-native English speakers wanting to study in English-speaking countries, it is also highly likely that you’ll need to provide proof of your English-language proficiency by taking an English-language test such as TOEFL or IELTS. Similar tests may be required for those studying in other languages.

What documentation should I submit with my application?

You may be asked to provide some supporting documentation as part of your application. Once again, requirements vary depending on the country and university, but international students are often asked to provide the following:
Passport photos for identification
A statement of purpose
CV/resume
Academic references/ letters of recommendation
Certificate and transcripts of your secondary education
Proof of English-language proficiency (e.g. a TOEFL/IELTS certificate, for schools in English-speaking countries), or other language test
Admissions test results (e.g. GMAT/GRE results, for graduate programs)

Do I have to speak a second language to study abroad?

This depends on the country you wish to study in, and the language your course will be taught in. If you’re not a native English speaker but wish to study a course taught in English, you will have to prove you can speak the language to a fairly high level, by providing English-language test results. This is to ensure you will be able to follow your course without any comprehension problems.
English is also used as a language of instruction in a number of other countries worldwide, particularly for graduate programs and business degrees. English-taught courses will be advertised on the university’s website and can sometimes be searched for using a centralized database run by a national agency.
Common tests accepted as proof of English proficiency are the TOEFL and IELTS. If you need to prove your proficiency in a language other than English, there are also similar tests in other languages, such as the DELF/DALF and TCF-DAP (French) or the DSF and TestDaF (German).

Will I need to attend an admissions interview?

As a prospective international student, it is relatively unlikely for schools to expect you to attend an admissions interview in person, although this is not unheard of – especially for the most competitive programs.
Some universities hold international interviews in various locations around the world, so you may be expected to attend one of these. There is also a growing trend of using video interviewing. This is like any other interview, with a prearranged time and date, but will take place online, via an application such as Skype.